The Wabash and Erie Canal was a shipping canal that linked the Great Lakes to the Ohio River via an artificial (manmade) waterway. The canal provided traders with access from the Great Lakes all the way to the Gulf of Mexico. Over 460 miles long, it was the longest canal ever built in North America.

The canal began operation in the summer of 1843, yet only operated for a decade before it became apparent that it was not economically viable. Even when canal boats were operated at extremely slow speeds, the banks rapidly eroded, and the canal had to be constantly dredged to be operable. The last canal boat on the Wabash Canal made its last docking in 1874 in Huntington, Indiana. Friends of the Rivers, Sweet Breeze, creates the mystery and excitement of what was to be a new era of commerce and travel in the Midwest.

The Wabash & Erie Canal traveled 497 miles from Toledo, Ohio on Lake Erie to Evansville, Indiana, through Fort Wayne, cutting a portage(route) between the Maumee River and the Wabash River.

Fort Wayne was the highest point on the canal (i.e. the summit), so Fort Wayne earned the name, “Summit City.”

Canal boats carried people and goods on rivers and canals from 1843-1874, which was much faster than burdensome wagons.

Draft animals, usually mules, pulled long, narrow canal boats by a rope on a path next to the canal, called a towpath. (Fort Wayne Trails has named a section of the trail system from Eagle Marsh to Rockhill Park, the Towpath Trail as this was a section of the Wabash & Erie Canal.) 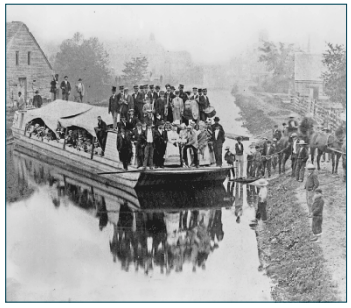